Throughout history, humans have also attempted to repair and correct broken or deformed bones. The term orthopedics was coined in 1741 by Nicolas Andry when he wrote a book on correcting childhood deformities. The front of this book had an image of a bent tree that was supported by a straight pole. This image has become a symbol for the field of modern orthopedics.

In Ancient Egypt, there is evidence that splints were used to correct broken bones. These were made with bamboo, reed and linen and have been found on mummies and other specimens. A carving in an Ancient Egyptian tomb from 2830BCE gives evidence that a type of crutch was also used during this time. One document, in particular, the Edwin Smith papyrus, which may be the oldest surgical or medical piece of literature details a few orthopedic conditions such as spinal injuries, how to treat fractures and information on dislocations. 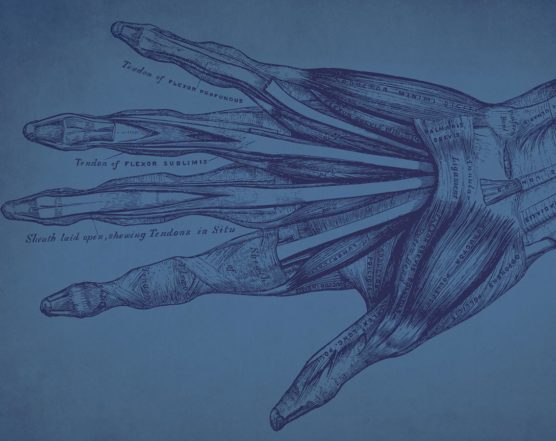 In Ancient Greece, the musculoskeletal system was researched and discussed in the Coprus Hippocrates (430BCE-330BCE). This text discussed the field of medicine and illness, through essays, research, notes, lectures and case studies. The field of orthopaedics is discussed, such as dislocations, maneuverers for the shoulder, and how to treat fractures.

Bonesetting as a trade can be seen throughout history, until as late as 1858. Bonesetters were those people that would treat fractures and try to reset bones. This practice has often been under a religious discipline with monks and nuns being bonesetters. However, in history, there have been other non-religious, self-taught healers and bonesetters.

A history of orthopedics can be seen in other cultures such as in Japan where it was practised as part of the martial arts disciplines in Judo. Traditional Chinese Medicine has also used splints, manipulation and repositioning to treat fractures and dislocation. Some of these techniques are over 3,000 years old.

Modern-day orthopedics have come a long way since ancient times. The field has been extensively researched in order to treat different bone and musculoskeletal conditions, with new advances and techniques being continually discovered. Orthopedic surgeons use modern technology such as x-ray and other imaging to diagnose conditions and then advanced techniques to perform surgery. Surgery can now be performed using minimal invasive techniques were only small incisions are made.

Orthopedic conditions are something that humans have always attempted to treat, however there is no doubt that modern techniques and technology mean that you would much prefer to have an orthopedic condition now rather than ancient times.